New Orleans became the center of the recreational cycling universe for one day, May 18, 1986, when thousands of bicyclists took to the streets on a muggy Saturday for the Kodak Liberty Ride Festival (KLRF).  The non-competitive ride began with a massed start--riders packed curb to curb on streets and side streets near the Louisiana Superdome.  From there it wound slowly through the city following a 17-mile loop route (with stops) through the CBD, the French Quarter out to Lake Pontchartrain and back to the Louisiana Superdome.
At the Superdome, finishers were treated to box lunches on the grounds before entering the Dome for a concert featuring Huey Lewis and the News (a big draw in the early 1980s) the Hooters, Daryl Hall and John Oates and Crescent City native sons, the Neville Brothers. 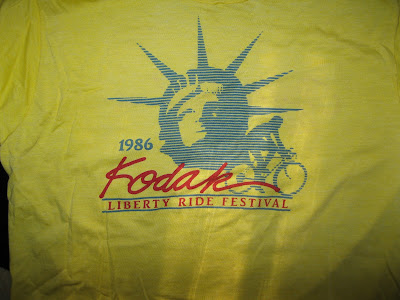 KLRF rides were held in about a hundred other cities in the U.S. at the same time.  The concert in the Louisiana Superdome, named "America Rocks" was televised via satellite to some of the other cities with KLRF rides of their own.  One purpose of the event was to raise $5 million to restore the Statue of Liberty in New York City.  Admission to the event was $26 but volunteers in New Orleans had their fees waived and received yellow T-shirts with "Official" printed on the back.  The standard KLRF T-shirt was white.  Tickets at the other KLFR events were $21.
I think local print and television media ignored the event despite its significance to the cycling in the city which at the time had very few cycling specific facilities:  The Jefferson Davis Parkway Path, the St. Anthony Path, the incomplete path along Lake Pontchartrain in Jefferson Parish and bike lanes in Audubon Park.  And a signed bike route using mostly the back streets of Uptown.
A committed cyclist with 16 years in the saddle to my credit, I was there in that sweaty throng of happy, smiling but mostly inexperienced cyclists.  Would not have missed it for anything.   But my recollections of the event are less than reliable.  I don't even remember what bike I rode.  Slides I shot that day (remember film cameras?) were ruined after soaking in the toxic marinate of post Hurricane Katrina (2005) floodwaters, but this is an excuse I use a lot when I try to prove my attendance at an event I may or may not have attended.  My only proof I was there is the yellow KLRF T-shirt pictured above.  (There must have been many more shirts to give out than there were riders because in the summer of 1986, KLRF T-shirts seemed to be a favorite clothing choice of the down and out living on the streets and in shelters of the city.)
(Many consider the ride a flop.  The turnout nationally was much smaller than expected; less than 100 riders showed up at the KLRF in Orlando, FL.  Some complained the event was too expensive for families.  The quality of the satellite transmission of the concert in the Superdome had both poor sound and poor video prompting many to leave their local events early.)
I do remember my clothes were dampened by a brief isolated rain shower in Lakeview and that The League of American Wheelman (LAW) now named Bicycle USA, a national non-profit that has promoted cycling since the late 19th century, was, in part, responsible for organizing the ride.  Locally, members of the Crescent City Cyclists served as volunteer ride captains.
But other than those few fuzzy details, I really don't remember much about such a significant event promoting cycling in New Orleans.  The free food and concert were enough to yank my chain.  For once I didn't feel like asking a lot of questions.
So when I got the invite to an afternoon cookout at the Uptown home of Marc Weiss, a co-founder of the Crescent City Cyclists, I was excited.  As president of the CCC at the time of the KLRF, Marc worked with the LAW in pulling the event off.  We could have some adult drinks and talk about old times.  He would refresh my memories of the ride and fill me in on the administrative details I had been oblivious to.   (Marc left the city about 25 years ago to live "up north" and only recently bought a home in N.O. to spend winters in the Crescent City.)
Well, having another eyewitness to quiz about the event didn't add much clarity to my own sketchy memories.  The scene of the two of us standing next to the grill not remembering as he flipped burgers was a lot like one scene in the movie "Blue Lagoon" where two teenagers, a boy and a girl, are marooned on a desert island.  After some time (their clothes had almost rotted off) they tried to amuse themselves by trying to remember the words to Christmas carols they learned as children.  They couldn't.  And we couldn't remember much about KLRF either.
So what I had hoped would be a detailed account of one of the more significant bicycle rides held in New Orleans is going to be not much more than documented proof I don't remember as much or as accurately as I think I do, a picture of the T-shirt commemorating the event and Marc smiling at the camera at his April 2017 backyard cookout. 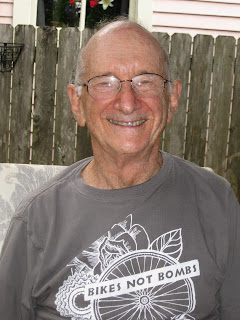 Great picture of Marc. So nice to have you at our house warming party. I know you knwo what happened to christopher last week. i hope you post about it and spread the word.