Christmas came a few days early for fitness buffs when City Park officials and politicians from New Orleans city government cut the ribbon on Festival Grounds, a former golf course redeveloped with a one-mile jogging/cycling path, a "fitness zone"with gym quality workout machines and  five grass playing fields.  The paved path is 18 feet wide and striped to give cyclists and joggers their own lanes.
Festival Grounds is off Wisner Blvd, and just north and across Freidrichs Ave. from Big Lake where there is a .75 mile asphalt track, and a small gravel environmental education path.  Paddle boats and single-speed bicycles can also be rented from the boat house beginning in spring.  The tracks at Big Lake and Festival Grounds are not lighted at night.
Built to accommodate large outdoor gatherings such as music festivals when not serving as an outdoor gym, Festival Grounds has four small power plants, installed to supply the increased electrical power lights and amplifiers at music festivals require.  The park is already home to the annual three-day VooDoo Music + Arts Experience.  The 2013 date is Nov. 1-3.
The 50- acre chunk of land, part of the park's Bayou Oaks, South Golf Course that closed in 2004, also has restrooms and a picnic shelter with 4,000 square feet of covered space.  Lights in the shelter and restrooms are solar powered.  There is a signed parking space for FEV's (Fuel Efficient Vehicles).
Errol Laborde, who attended the ribbon cutting 12.17.2012, remembered that when his father headed up the park in the 1950's the revenue from the park's four golf courses was important for the operation of the park.  When asked what he thought his father would think of replacing golf with a fitness area/festival ground, Laborde said his father, "would be very proud of the changes."
For more information contact 504.482.4888.

Posted by jcurryjr at 1:42 PM No comments: 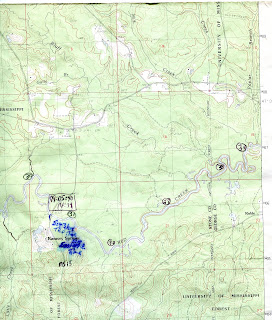 A boat launch and parking lot is planned for Red Creek at Ramsey Springs (Mississippi Highway 15), said Judy Steckler, director of the Land Trust for the Mississippi Coastal Plain (LTMCP), managers of the 55 acre tract in Stone County MS.  The site is now closed to the public but could reopen with the launch and lot in the spring of 2013.
Note:  An on-site visit by officials of LTMCP, Stone County and the consultant for the project is planned for March 11, Steckler said today (March 1).  Dates to start and finish the construction of the boat launch and small parking lot have not been set yet.
A 30-mile stretch of Red Creek, from highway 26 west of Wiggins to highway 15 has been named a Blueway by the LTMCP.  The group has installed mile posts along the creek.  These help first responders find lost paddlers and people in inner tubes caught by darkness, Steckler said.  The blueway designation carries no additional environmental protections but does promote the stream as a desirable waterway for paddling and other outdoor recreation.  A brochure about the blueway is available from the LTMCP web site.
The creek is deserving of the praise.  Despite flowing through only a short stretch of public land--a smidgen of the De Soto National Forest-- the creek flows clean, tea-colored and shallow over a nearly white sand creek bottom and past numerous sandbars.  The land along the banks is settled but houses and camps are generally well back from the creek and screened from view by a ribbon of standing forest 100 feet thick or more.
Float trips on the docile creek have been promoted in brochures for more than 25 years but use of the scenic creek for paddling trips has been light leading to a number of canoe liveries and shuttle operations to open and close after a season or two.  Red Creek is now mostly visited by intrepid paddlers who have their own boats and are willing to risk leaving a vehicle overnight on a deserted creek bank.
This may change with a recent increased interest in the creek, Steckler said.  There are two places along the Gulf Coast that now rent canoes to use on Red Creek. They join an existing business based in Hattiesburg that rents canoes and runs shuttles on several south Mississippi Rivers.
A parking lot and picnic area at City Bridge, upstream from Ramsey Springs, was plagued with rowdy crowds leaving lots of litter right after it opened a few years ago.  But locals pressured the county government to take action and now the area has been cleaned up and is a popular family picnic destination, Steckler said.
However the growing use of all terrain vehicles (ATVs) on the stream's fragile sandbars and creek bottoms presents a new challenge for stream preservationists, Steckler said.  Google "ATV" and "Red Creek" and there will be several sites with pictures of ATV's gouging tracks in the stream's sand bottoms and banks.
Steckler said the LTMCP, and similar organizations have enjoyed strong support from landowners along Red Creek who want to see the stream preserved in its natural state for later generations to enjoy but also hear from landowners who fear promoting the creek will increase litter and attract badly behaved users to what is literally their back yard.
Steckler has big plans for the Ramsey Springs property when improvements to the property are complete.  While still at the brain storming stage, these plans could include a bicycle race or paddling race or foot race or even all three at the same time, she said.