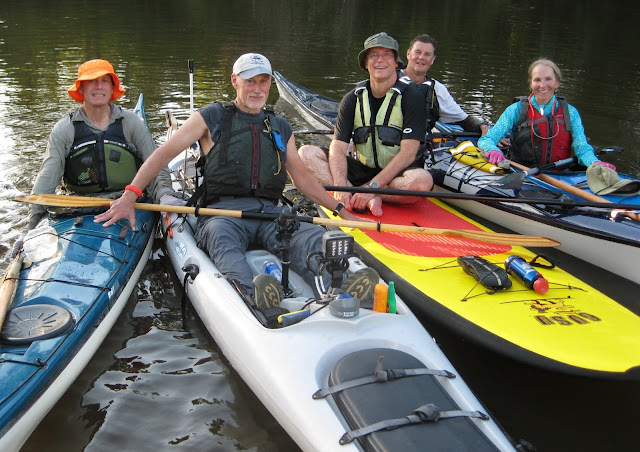 WHO: From left to right-Mike Beck, Baton Rouge, LA; Terry Guilbau, Pass Christian, MS; Bob Helber, Slidell, LA; Hank Baltar, Gulfport, MS; Bonny L. Schumaker Ph.D., New Orleans, LA.
WHAT: Social paddle.  Any canoe, kayak or paddleboard.  Any skill level.  Trips start at 5:30 p.m. sharp and last about 1.5 hours or until deep twilight.  Trip could be anywhere along the Mississippi Gulf Coast and freshwater just inland and a few places in Louisiana.  This trip, attracting seven paddlers, was on the Jourdan River Blueway Trail, north of Bay St. Louis, near Kiln, MS.
WHERE: Picture was taken about 1.5 river miles up river from the put-in at McLeod Waterpark, 8100 Texas Flat Road.
WHEN: Picture taken July 15, 2015 about 7 p.m.
WHY: Something to do on July 15, 2015, a warm dry, partly cloudy Wednesday about 7 p.m?  Ask the people in the picture why.
HOW: Be a member of the social media site, "Mississippi Kayak Meetup." to be notified of upcoming outings ($3 annual membership).  Provide a boat for yourself, (or in one instance here, a paddleboard) and all your gear: life vest, paddles and a waterproof flashlight or kayak
﻿
light being mandatory.  Also bring dry clothing and shoes for the drive home.  Observe the outing rules; don't drink alcohol while on the water, wear your life vest and, if asked answer the question, "Can you swim?" answer truthfully.

Wednesday's paddling outings are organized by Hank Baltar a veteran kayaker and retired US Navy Lieutenant Commander.  Hank, certified by the American Canoe Association (ACA) to teach beginning kayaking, has a side gig teaching kayaking.  He charges a fee for these ACA sanctioned lessons.  The Wednesday paddles are free--no lessons are given. The social paddles are held on an ad hoc basis when the weather and Hank's schedule permits.  Hank insists on safe fun at every outing with every paddler responsible for their behavior and their own safety both on and off the water.  When Hank sets a social paddle date he posts detailed descriptions in his Mississippi Kayak Meetup entry.  Hank likes to see people who like to kayak get together.  He tolerates canoeists.
Those who show up at the Wednesday paddles have skill levels ranging between which-end-of-the-paddle-goes-into-the-water beginners to blue water kayaking experts rolling boats costing $$$. The trips are free, though there may be a launch fee or park entry fee.  Rarely are there kids on the trips.  Sometimes there are dogs.  Always ask beforehand to avoid disappointment.  Cell phone service is good for most destinations but not every single one.

The Biloxi Police did a wonderful job of policing the Kuhn St. boat launch.  They enforced existing parking rules at the small launch parking area limiting parking to those with boats, chasing away those who only wanted to park in the lot to watch the fireworks.  They allowed kayakers to use a no parking zone near the water to off load their boats and gear then directed drivers to a parking lot a short walk away where they could park while on the island.  The police were still on duty after the fireworks display keeping the no parking areas of the launch parking area empty of cars so kayakers could quickly retrieve their kayaks and gear.  These efforts by the police made a huge difference in the ease kayakers could access the bay and Deer Island and made their trip much easier to execute.
Once off the water, paddlers quickly loaded up, said goodbye to new friends and old  and headed to their homes in New Orleans, Covington and elsewhere satisfied with another Fourth of July holiday adventure under their belts.