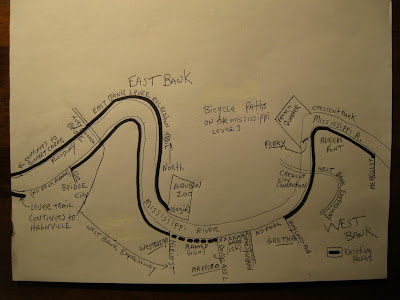 Bicycle paths began to appear on the tops of Mississippi River levees in the metro New Orleans (LA) area in the late 1990s.  Responding to pressure from cyclists and others who pushed to replace the bumpy shell surface with a blacktop path that would promote bicycle commuting into the city from the upriver neighborhoods, parish governments, along with the Army Corps of Engineers worked together to make the paths happen.    Since then about 30 miles of blacktop connecting Audubon Park to the Bonnet Carre Spillway, has been built on the East Bank of the river.
On the West Bank three sections have been built but they do not connect.  Starting down river, about four miles has been built from Merrill St upriver to Gretna.  There is a gap where there is no levee path from Gretna upriver to Klein St, about four miles.  About five miles have been built from Klein St. in Westwego to 12th. St in Bridge City.  There is no path through the former site of the Avondale Shipyard.   A 17-mile stretch has been built from what was the boundary of Avondale Shipyard up river to Elm St. in Hahnville in St. Charles Parish.
Plans to close these gaps in the bike path and make it one continuous path from Algiers upriver to past Hahnville (and beyond) have been on parish master plans for years.  There are highways parallel to the levee at ground level but they are narrow, have no shoulders and carry heavy traffic, discouraging bicyclists who might be looking for a detour around the levee path gaps.
Now it looks like the gap between Klein Rd. and Gretna may close a bit.
The next sections to be done are; 1.6 miles from Klein St. in Westwego downriver to Douglass Lane in Marrero and a 1.2 mile section beginning at Douglass Lane ending at the Harvey Canal.  These two sections will extend a section of existing path at begins at 12th Street in Bridge City to about seven miles, according to a story that ran in the New Orleans Advocate, Sunday, May 7, 2017.
The Klein St./Douglass Lane stretch could open by mid-2018 but the 1.2 mile stretch is still at least two years away, the paper reports.
-30-

Jack - Good info. Please fix your map image size. It is too wide - covers part of the right hand column.