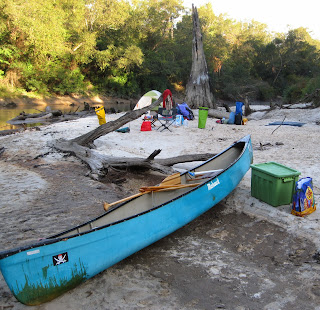 Black Creek, a winding, black water creek bisecting the 501,000 acre De Soto National Forest southeast of Hattiesburg, MS. is considered to be the best canoeing waterway in the state of Mississippi.  This is especially true if canoe camping is your thing.  Widely spaced sandbars punctuate the densely forested clay banks and serve as beaches in summer and cozy primitive campsites for one or more tents year around.
This "specialness" has not been ignored by the U.S. Congress.  A 20-mile section of the creek (Moody's Landing to Fairley Bridge) is a National Scenic River--the only one in Mississippi--and this stretch flows through the 5,050 acre Black Creek Wilderness, one of only two Wilderness areas in the state.  (The other is the 940 acre Leaf Wilderness, also in the De Soto National Forest.)
The creek's signature "black" tint is actually more the color of ice tea, the deep clear brown coming from the tannin leached from vegetation along creek's banks.  During dry spells when there is no rain to wash silt into the creek paddlers can peer over the side of a canoe and see three feet to creek's sandy bottom.

UPDATE 10-28-2013
After reading the story below about the vandalism of a vehicle while parked overnight at City Bridge on Red Creek in Stone Co. MS, Jon Bono emailed me this:
"This is unfortunate...City Bridge has cleaned up a lot but still subject to such as this.  Someone shot my grill on the my sandbar about 7 times with a pistol.  Why I don't know but I sure hate this happened to you guys."


The weekend of October 19-20, a vehicle parked overnight Saturday night at the small public park at City Bridge, in Stone Co. MS, an access to Red Creek in a rural part of the county, was damaged by a rifle bullet while the owner was leading group of Boy Scouts on a canoe/camping trip on the creek between U.S 49 and City Bridge, the man who owned the vehicle said.
The damage was discovered when the man finished the canoe trip and drove out of the park.  He quickly noticed a front tire was flat.  While changing the tire he saw a small round hole on the inside sidewall of the tire and wondered what he had run over to cause such damage to the tire.
Shortly after that, after arriving at the informal U.S. 49 put-in on Red Creek, six miles north, the vehicle engine quit just as he made the sharp turn off the highway to the creek.  He noticed the engine was overheated but as he was pouring water into the radiator, it was draining out of a bullet-sized hole in the bottom of the radiator.
He suspects someone used his vehicle for target practice Saturday night, shooting from a vehicle traveling on City Bridge Rd., judging from the trajectory of the bullet that flattened his tire and holed his radiator.  His vehicle had to be towed from the creek to be repaired.
He said he did not file a police report.
Several years ago cars parked at City Bridge overnight while a group of paddlers were canoe/camping on the creek were broken into and some items were stolen.  At least one of the thieves was caught later by local police and the stolen items were recovered.
Red Creek is a popular creek for overnight canoe trips because it is a shallow, easy paddle and there are numerous sandbars on which to camp.  The water in the creek is open to the public but the creek flows through private property except for a few miles upriver and down river from the MS 15 bridge at Ramsey Springs.
There is no canoe livery servicing the creek so overnighters must park their vehicles at remote and unguarded road right-of-ways or public parks, unless they know a landowner who will permit them to park on private property. 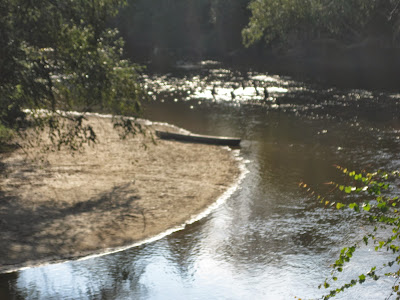 THE NATIONAL FOREST RECREATION AREAS THAT WERE CLOSED WHEN THIS STORY WAS POSTED SHOULD OPEN TODAY.  A BUDGET BILL WAS PASSED BY CONGRESS LAST NIGHT AND SIGNED BY THE PRESIDENT THIS MORNING DIRECTING ALL FEDERAL AGENCIES TO OPEN.

Black Creek Canoe Rental is open year around but by reservation only beginning October 1st.  Services include canoe and kayak rentals and shuttles and private boat shuttles.  Hikers and backpackers can make arrangements for shuttles to and from trailheads on the 41-mile Black Creek National Recreation Trail.  At the Black Creek Canoe Rental website there is a link to the USGS useful in checking real-time creek water levels at the Brooklyn gage.  The business also has a Facebook page.  The phone number of the voicemail at the business is 601.582.8817.  Brooklyn is about 20 miles southeast of Hattiesburg, MS. 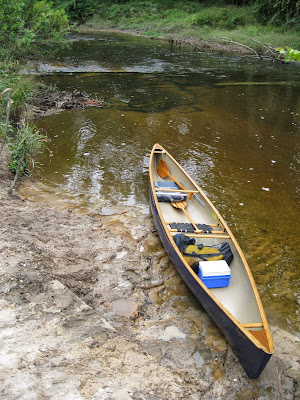