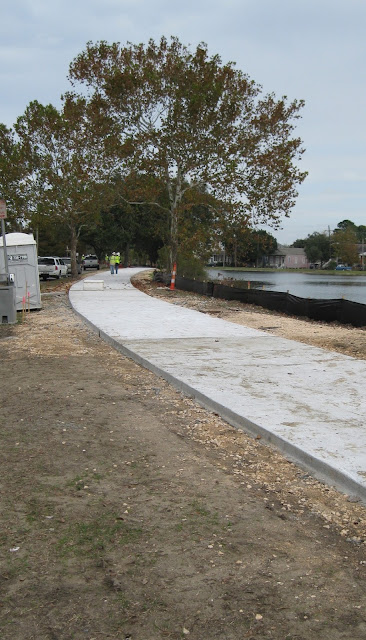 Construction on the Wisner Bike/Pedestrian path extension running south along Wisner Blvd. and Bayou St. John from the Wisner Overpass to Esplanade Ave. began in November.  This picture is of the path just east of Big Lake in City Park in New Orleans, LA.
The concrete path will be constructed in two phases.  The first phase is from Esplanade Ave. north to De Saix Ave. under construction now.  The second phase is a short stretch linking De Saix Ave. with the south end of the bike/pedestrian path on the recently completed Wisner Overpass.  The overpass arcs over a railroad track and I-610.  There has been a highway overpass in that location since the 1930s.
The two phases are expected to be completed in late winter or early spring of 2018 providing a separate bike/ped paved path from Robert E. Lee Blvd. south to City Park Ave.   Tthe new path will be another step in establishing a continuous bicycle/pedestrian path from the Mississippi River Uptown New Orleans to Lake Pontchartrain at Spanish Fort.
Cyclist have been riding from Uptown to Lake Pontchartrain for decades using existing streets through neighborhoods and the roads in City Park to detour around the previous Wisner Overpass which was narrow and had no bicycle lanes.
The route now is a mix of separate paved bike lanes, striped bike lanes and directional signs.
When construction finishes on the relocation of the Children's Museum to City Park, traffic on the narrow park roads will increase, making the Wisner Path--crossing two busy intersections  controlled by traffic signals--look like the safer route.

This fall, a one-mile bike/ped path was built from Harrison Ave. north to Robert E. Lee Blvd. along Marconi Blvd. in City Park.   The 10-foot wide concrete path connects with an older path in the park along Robert E. Lee Blvd. from Marconi Ave. to Wisner Blvd.
Marconi Blvd. becomes dangerous for cycling south of Harrison Ave. as the narrow four-lane with no shoulders is the only access to several soccer fields and the City Park tennis courts.  To detour around this hazardous stretch turn into the park using the painted bike lane along Harrison Ave.

Posted by jcurryjr at 8:05 AM No comments: