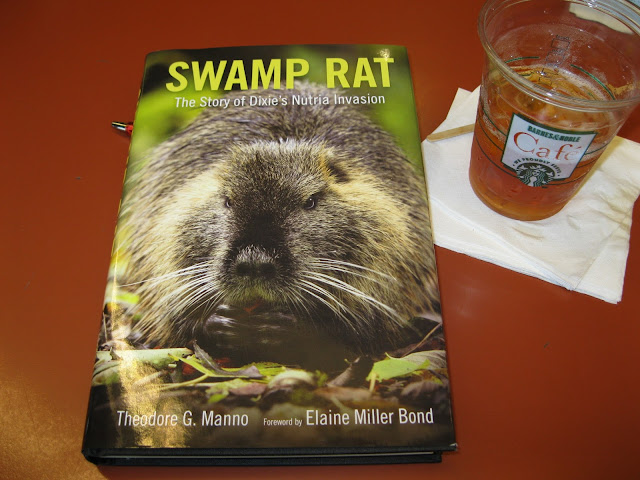 Everyone living in Louisiana knows the damage nutria; a non-native rat-like rodent (but not a rat) is doing to the marshes protecting state's coast from storms and hurricanes rolling in from the Gulf of Mexico..  Nutria eat the grasses that hold the marshes together.  Without the grass the marshes wash away leaving only open water; with nothing to dissipate the fury of dangerous storms.
Nutria have prodigious appetites.  And they are prodigious breeders.  These two traits make nutria well deserving of the tag; the rat that ate Louisiana.
This is a bad thing, a very bad thing, Theodore G. Manno points out repeatedly in is new book "Swamp Rat: The Story of Dixie's Nutria Invasion," University of Mississippi Press/Jackson, 2017.   The furry rodent from South America with the voracious appetite for native swamp grasses, is largely responsible for a massive loss of land along the Gulf of Mexico-land that protects the populated parts of the Bayou State, many claim.  And all attempts to stop them have failed.
At least that is the gloomy overview.  But there is so much more to the story of the nutria and how a 15-pound furry rodent with yellow front teeth, surviving only on plant matter became a major concern for the future of Louisiana, and to a lesser extent, the Gulf South.
Manno fills in the fascinating backstory of how nutria made their way to Louisiana (and at one time 39 other states in the U.S.)  They were invited.
The trapping, skinning and export of pelts has always been big business in Louisiana.  While nutria were still in South America, their native habitat a huge fad for beaver hats swept Europe beginning in the 1600s.  After almost all beaver in Europe were harvested to make the hats, the supply of beaver began to come from the colonies in North America.  But in the 1830s demand for beaver hats suddenly dropped in favor of hats made from silk.  At the same time over-trapping in North America caused the beaver market to crash.  Nutria began to be imported from South America to shore up the valuable fur market but nutria hats never caught on.  (See Seinfeld episode # 142 for an interesting take on the "rat hat.")
But the market for fur pelts for clothing, gloves and wraps to sell to the luxury market was still strong.  Nutria fur is nice fur and remained in demand for coats and other fur goods.  But it ws not the favorite of furriers.  Muskrat, of which there were many in Louisiana, became the popular pelt of choice in the early 20th century.  Louisiana was a muskrat Mecca.  All of Canada could produce only 60% of the muskrat pelts that Louisiana did.  Muskrat fur pelts peaked in 1945.  Five years later the fur market in Louisiana was a bust.
The nutria harvest increased to replace the dwindling muskrat population but the fur harvest just limped along for a decade or two as the fad for wearing fur (unless you were born wearing it) died.
But not the nutria.  The harvest of nutria by trappers had kept the nutria populations from expanding, despite their prodigious breeding ability.  And while the non-native species had very few natural predators, alligators would eat them.  But by the 1960s alligators had been hunted for their skins to the point there was a fear they might be trapped to extinction.  So with the nutria's two major predators, man and alligators, out of the picture, nutria populations exploded.
Manno shows how the fortunes of the nutria intertwined with that of other major Louisiana economic foundations such as sugar cane.  He writes with great detail about how and when the nutria came to North America.  (Nutria can be found or have been found in 40 states in the U.S., though are now mostly in 16 states, Europe, the Middle East, South Korea, southern China, India and Japan.)
A chapter of the book goes into detail about one of the most famous nutria legends:  That all the nutria chewing up the state now are from several nutria pens on Avery Island, LA that were destroyed by a hurricane in the 1930s releasing the hearty herbivores into the wild.  To discover what this nutria expert thinks of this venerable Louisiana tale, buy the book to find out.

The Tammany Trace, an abandoned railroad right-of-way converted to a 27.5 mile linear recreation path through St. Tammany Parish (LA) has been named the 31st trail added to the Rails-to-Trails Conservancy's Hall of Fame.  The RTC, a trails advocacy group,  has participated in establishing several hundred recreation trails in the U.S from unused railroad right-of-ways.  In almost all cases the R.O.W. is rail banked; an agreement that allows the R.O.W to serve as a trail, thereby keeping it together, until the time it might be in the national interest to make it a railroad again.
In the 1986 a 31-mile long stretch of Illinois Gulf Central Railroad connecting Covington with Slidell was abandoned.  The idea of developing the narrow right-of-way into a recreation trail for cyclists, hikers, runners, walkers and roller skaters with a side trail for equestrians, was first proposed by a grass roots group of trail advocates, S.T.A.R.T. (St. Tammany Area Rails to Trails.)
Kevin Davis, a St. Tammany Parish Police Juror in the early 1990s worked hard to convince the parish to buy the recently abandoned R.O.W saying it would provide a safe place for recreation in the rapidly growing parish.  A grand opening of the first stretch of Trace, 8.6 miles connecting Abita Springs with highway U.S. 190, was held September 17, 1994.
With the completion of a bridge across Bayou Lacombe, several years ago, the Trace is now substantially complete at 27.5 miles.  The Trace runs east and west from downtown Covington to a dead end at Neslo Rd. just west of Slidell.  To bring to Trace from Neslo Rd. to Heritage Park in Slidell, a route of suburban roads and side paths are being considered.
Voters to the RTC site chose the Trace over two other finalists.  In the past Hall o Fame inductees were chosen by RTC staff.
Qualities such as outstanding scenic value, amenities and historical significance are considered.  The Tammany Trace, with a total of 500 acres of greenspace of its own passes through a large state park and a U.S. Fish and Wildlife preserve.  Towns along the way, Covington, Mandeville, Lacombe and Slidell offer a variety food and beverage outlets near the Trace.  RTC officials said, in declaring the Tammany Trace in the Hall of Fame that the north shore trail, about 30 air miles north of New Orleans (LA) attracts over 300,000 visitors annually, an average of 821 a day!
Want to visit another RTC Hall of Fame Winner near by?  The Longleaf Trace, running about 42-miles one way from Hattiesburg northwest to Prentiss, is a beautiful ride.  Hattiesburg, MS is about a two-hour drive northeast from New Orleans.  The Longleaf Trace, opened Labor Day 2000 and was named as a RTC Hall of Fame Trail in 2010.
For more information about both the Tammany Trace and the Longleaf Trace, search this blog.

In the last couple months, the New Orleans Advocate has given much space in its printed  pages for stories about the expanding network of bicycle lanes in southeast Louisiana.

New moves made to finish the Tammany Trace into downtown Slidell.

Sara Pagones, in the July 16, 2017 edition, wrote about efforts by both St. Tammany Parish and the town of Slidell to complete the last few miles of the Tammany Trace.  Running east, 27.5 miles from downtown Covington, the Trace now dead ends at Neslo Rd. about four miles short of the trail's eastern terminus at Heritage Park in Slidell.
When first proposed in the 1990s the Trace was to follow an abandoned right-of-way into Slidell and the park.  But that has not proven to be a suitable route.  Now, as reported in the New Orleans Advocate, a series of existing suburban streets will become the route linking the park with the Neslo Rd. dead end.
Preparing the streets to accommodate bicycle traffic safely will require a several separate projects including short stretches of new Trace construction, and modifying existing streets with bike lanes.

News of a new bicycle path to be built along the east bank of the Mississippi River in St. Bernard Parish made the front page of the Orleans Advocate, July 10, 2017.  Penned by Advocate staffer Chad Calder, the piece tells of an ambitious plan laying out a cycling network of nearly 35 miles of trail looping the densely populated area of the parish.
Construction on the first segment, a three mile stretch atop the Mississippi River levee from the Valero Refinery down river to the Violet Canal, will begin in September.  Later phases have the finished trail running 11-miles from Arabi down river to Caernaron, much of it on the levee.
Future plans include extending the trail to the Plaquemines Parish line.  A trail is planned for adjacent to St. Bernard Highway and bike lanes connecting  eastern Orleans parish with St. Bernard are also planned.
The "40 Arpent Trail," will encircle the urbanized portion of the parish with a 26-mile loop trail that connects with the Mississippi River Trail.

Posted by jcurryjr at 6:16 PM No comments:

Renting a bicycle to ride in New Orleans has never been easier.  Really.  Using your phone, computer or tablet, visit Spinlister  the world's biggest peer-to-peer bike sharing platform, to connect with someone in New Orleans (or anywhere in the world really) who will rent you one.
I visited the site to check it out.  Spinlister will not let you go deep into the site without registering (free) but I learned: There are lots and lots people renting bikes in New Orleans,  None listed with Spinister apparently are shops yet, and there are a wide variety of bike available.  After a few minutes on the site I found bikes ranging in price from cruisers at $15 to racers with carbon fiber frames for $100.  I could not tell how long that was for.  There was even an adult tricycle and a Santana tandem.  Visit the site for the details. If you have had any experiences with this platform while in New Orleans, send a comment for review to this blog.

Posted by jcurryjr at 1:11 PM No comments: