Outdoor books of days gone by

Regional outdoor books of the past
Books about hiking, biking and paddling in the New Orleans area that are no longer in print can be interesting reads. Not only to they serve as markers of the past to show how far we have come (or not) in having public places to enjoy outdoor recreation, they can also provide some valuable background about the places we go now. Here is a selection of what may or may not be out there if you look hard enough. Some are in local libraries in their "Louisiana" collections and every once and a while old copies may show up at used book sales and in used book shops.
The New Orleans Bicycle Book, Louis Alvarez, Little Nemo Press, 1984. More than 50 bike rides, most of them only a few miles explore the neighborhoods of New Orleans, Jefferson Parish, the West Bank and the North Shore. Each chapter starts with a description of a neighborhood's history and noteworthy sites along the ride. Maps are very good; routes are drawn over USGS topographic maps. And there are turn by turn written directions. Long out of print, Alvarez's book is the holy grail of used where-to-bicycle- book finds. Nicely produced and written, copies can be found on the Internet for up to $100, but you might still be able to find one at a book sale for a fraction of that. Or find a friend that has one and borrow theirs.
Trail Guide to the Delta Country, John P. Sevenair, editor, New Orleans Group of the Sierra Club, 1997. Useful but badly in need of updating this collection of more than 70 canoeing, biking and hiking outings began more than 30 years ago as a collection of photo-copied hand drawn maps to share what a once potent local Sierra Club was learning about the plentiful outdoor options here. The last edition (to date) published in 1997 is a bonifide trail guide with accurate and well drawn maps and trail descriptions written by people who have been there. Before setting out on any of the trips be sure to up-date with the latest information from web sites and telephone calls. A lot can happen in 14 years, even to a river or a trail.
Canoe Trails of the Deep South, Chuck Estes, Elizabeth F. Carter and Byron Almquist, Menasha Ridge Press, 1991. Like the Sierra Club book, this one contains a wide variety of canoeing experiences from well known summer destinations to remote swamp treks you need a guide, GPS or both to return from. Louisiana and Mississippi are represented by 32 trips, Alabama has 18. Excellent descriptions of streamside flora and geology: the maps are a little hard to follow. Take the same caution as you would with any information that is 20 years old; verify, verify, verify.
-30-
Posted by jcurryjr at 9:14 AM 1 comment:

Summer Reading
Many adventurers in the frozen north (anything above the Mason Dixon Line) claim the cold of their winters and the heat of a New Orleans summer have the same effect: you just don't want to go outside.
So if the heat and humidity have you under house arrest, take the down time to catch up on some reading to help plan for future trips when the weather is more agreeable for an outside adventure.
50 Hikes in Louisiana by Janina Baxley,( The Countryman Press, 2003). A complete guide to hiking the trails of the Bayou State. Includes the well known such as the 26.2 mile Azalea Trail near Alexandria to the not often hiked shorter trails such as the three-mile Boy Scout Road trail in Big Branch March NWR. Each trail gets a details treatment including a map (USGS topographic maps are the base) and full description. All you need.
And that's true for Hiking Mississipp-A Guide to Trails and Natural Areas, by Helen McGinnis, (University Press of Mississippi, 1994) Another complete guide that even veteran hikers will be surprised at how many trail there are in the Magnolia State they never heard of. (Who knew there was a waterfall, with a claim to being the birthplace of the mint julep, in the Vicksburg National Military Park and Cemetary?).
For those who like wetter adventure there are two books by Ernest Herndon, Canoeing Louisiana and Canoeing Mississippi, (University Press of Mississippi). Herndon, a writer for the Enterprise- Journal in McComb, writes both as a story teller and veteran paddler. Featured in both book is the social history of the people just beyond the banks of the streams and bayous and rivers that cut across these two rural states. This rich writing style, with a faint nod to Mark Twain, makes these two books satisfying reading no matter if your are a paddler or not. Fishing where he paddles gets special attention. On the other hand practical information about launches, water levels and the business of getting a canoe in the water and getting it out at the end of a trip for the drive home, is kept to a minimum, leaving those who really, really like to plan, wanting.
All four were written before hurricane Katrina in 2005 so before heading out, make a few phone calls and visit a few web sites to check for changes in access, hours of operation, fees or even if a location is even open any more.
-30-
Posted by jcurryjr at 12:37 PM No comments: 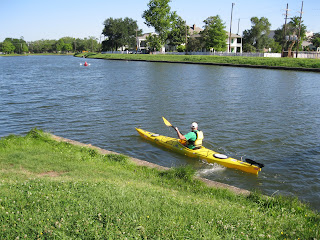 When paddlers get together to discuss where to take their canoes and kayaks for the next trip no one brings up Bayou St. John in New Orleans.
Someone should.  From Robert E. Lee Blvd. to Orleans Ave., it's a seven mile round-trip-plenty of miles for a workout.  And while flanked by unremarkable post WWII subdivisions north of the I-610 bridge,  between Orleans Ave. and Esplanade Ave., paddlers can cruise by some of the oldest homes in the Crescent City.  Don't forget the great eateries and coffee houses just a few minutes away for an after-paddle get together.
There are no designated canoe launches on the bayou.  Paddlers informally use the west bank near the Dumaine bridge (mucky, but no concrete retainer to climb down or over).  Along Moss St. near the Magnolia bridge, is an angled concrete retainer along the water's edge paddlers also often use.  Putting in here allows paddlers to bypass going under the Magnolia Bridge often a very tight fit (or no fit) depending on the water levels in the bayou.
The historic swing bridge has been closed to motorized traffic for decades and is used by pedestrians and bicyclists, many of them going to the Jazz and Heritage Festival PRESENTED by Shell.A grass roots campaign to raise funds to refurbish both the Magnolia Bridge and the Dumain Bridge is underway.
Do not park on the grass.  Park on the street in front of the homes there.
Commercial kayak tour groups will often launch at the Esplanade bridge (take the City Park streetcar) or from near the I-610 bridge and the LSU Dental School.
Most of the historic action is between the I-610 bridge and the end of the bayou at Lafitte St.  Just west of the Magnolia Bridge is the Pitot House, the only Creole-colonial style house open to the public. Tours are offered Wednesday-Saturday from 10 am-3 p.m (www.louisianalandmarks.org) .  Agile paddlers can pull up to the concrete retaining wall in front of the house, built in the early 19th century and moved to its present location in the 1960's), hop out and tour the home.
In 1699 Native Americans living in the area first showed the bayou, then a swamp studded with huge cypress trees, to Jean Baptiste LeMoyne, Sieur de Bienville, the founder of New Orleans.  A plaque on the bank at DeSoto St. marks where the two-mile portage to the city began.  In colonial times that water route-Gulf of Mexico, though lakes Borgne and Pontchartrain, and Bayou St. John, saved having to sail a ship up the winding Mississippi 95 miles to the city--a trip that could take several months if the wind did not cooperate.
The bayou remained a waterway into the city until the 1920's though its role as a transportation route diminished after the New Basin Canal (to the west where I-10 is now) was dug in the 1830's.
By the 1930's the bayou was in sad shape.  No longer commercially viable, it became home to squatters in ramshackle house boats.  As the city expanded and new housing was built flanking the bayou, swarms of mosquitoes from the nearly abandoned waterway vexed the new residents.  There was serious talk about filling it in with dirt and turning it into land.
But a vigorous campaign led by the management of City Park, turned opinion around and by the mid- 1950's it had been dredged, and cleaned up with the current concrete bank retainers you see now.  Most of the bridges date from this time too.
The bayou turns north at City Park. At the Esplanade Bridge, notice the equestrian statue to the west. That's P.G.T. Beauregard, the Louisiana born Confederate general. On April 19, 1861, Beauregard ordered the cannons in Charleston, SC fire on Ft. Sumpter in the harbor igniting the Civil War. Continue north and pass under the railroad bridge and the I-610. If your paddle hits something it might be the roof of a car that has been driven into this out-of-the-way part of the bayou to dispose of it for an insurance payoff.
In about a quarter of a mile and just after passing under the Harrison Ave. bridge, you will pass Park Island to the east, now the area of exclusive homes. In the early days the route of the bayou went to the east around the island. The direct channel was dug much later.
A variety of wildlife call the bayou home. Paddlers can see mullet jump and wary turtles break the water's surface with their heads as they come up for air. Mama ducks trail strings of little ducklings busy paddling behind her in tight formation. Pelicans glide then dive for fish-their steep, sudden drop to the water is sometimes close enough to startle daydreaming paddlers.  Bayou St. John is in the Louisiana Scenic Rivers system.
After passing under the Mirabeau bridge the bayou opens up significantly becoming wide and like a lake. The trip from the Dumaine Bridge to Robert E. Blvd is about 3.5 miles, one-way. Continuing a trip to the lake requires a portage of about a mile across the road and around a large hurricane protection facility to the the lake.  It was not that different 300 years ago when the problem was not a hurricane levee but a shallow bar at the bayou's entrance that might have delayed entrance to the city a week or more until the water was deep enough for boats plying the coastal trade route from Mobile or the northshore to pass.  Big ships from Europe continued to use the Mississippi River to reach the city.