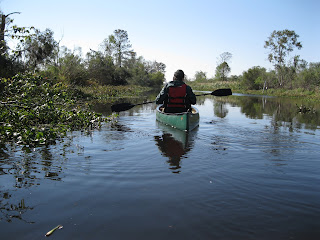 Park rangers are again leading canoe treks on the waterways in the 20,000 acre Barataria Preserve in the Jean Lafitte National Historical Park south of New Orleans, LA.
The trips were stopped over a year ago when the growth of water hyacinths, an invasive species, clogged the waterways rendering them impassable for paddlers.
However, in late August, the winds of Hurricane Isaac cleared the pesky plant from the surface of some of the waterways in the preserve.  The Saturday canoe treks were resumed in October.
The ranger-led trek is short.  It's about a three mile round trip and takes about two hours.  Start at the canoe launch at Twin Canals (off highway LA 45 south of Marrero) and turn left (southwest) at the Kenta Canal.  After a little over a mile Kenta Canal becomes too clogged with hyacinths to proceed.
As you turn around be sure to look north up the canal.  If the weather is clear you will be able to see the One Shell Square high rise in the New Orleans CBD at the corner of St. Charles Ave. and Poydras St.
The banks of Twin Canals are forested with hardwoods which arch over the canal in places.  The Kenta Canal, on the other hand, is wide open, its hardwoods dead or dying because salt water from the Gulf of Mexico regularly inundates them during storms as the protective marshes to the south slowly become open water.  Tall grasses and shrubs line the banks now and make excellent habitat for the alligators that often can be seen sunning any time of the year if the day is warm.
Many of the waterways in the preserve are still clogged, most notable of these is the beautiful Bayou Coquille (KO-KEY-YA).
The preserve also has a not-to-be-missed visitor center.  Hikers and walkers will enjoy a jaunt on the more than two miles of paved and boardwalk trails through the swamp and the dramatic view of the marsh at the end of the Marsh Overlook Trail.

IF YOU GO: Reserve a spot on a canoe trek by calling the Jean Lafitte National Park and Preserve at (504) 689-3690 ext 10.  For more info visit www.nps.gov/jela.  Pets are not allowed on the trails and leaving unattended animals in vehicles is prohibited.  No food or drink (other than water) are allowed on the trails.   The canoe trek is free if you bring your own boat.  Bayou Barn rents canoes for the trek-$20 per person, a two-person minimum per canoe.  Fee includes delivery and pickup to Twin Canal.  To reserve a boat visit bayoubarn.com or call
(504) 689-2663 or 1-800-862-2968.  Accept no substitutes.