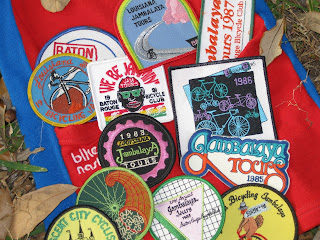 Back in the day, for many "serious" bicyclists in south Louisiana, the Thanksgiving holidays meant a trip to the hill country north of Baton Rouge for three days of biking, camping and the celebration of all things velo.
Begun in the mid-1970's by the Baton Rouge Bicycle Club (BRBC), Jambalaya Tours, or Jam for short, attracted riders of all stripes from hard-core racers spinning the finest Italian steel frames to families of recreational riders towing trailers with toddlers.  Each of the three days, riders would stream from the campground and ride the undulating and ancient back roads of the parishes of East and West Feliciana, through a fall tableaux of upland evergreen pine forests, plantations, sharecropper's shacks and the occasional field of emerald green winter rye grass.
Sag stops along the way dispensed sports drinks, Fig Newtons and peanut butter and jelly sandwiches to hungry riders.  Directions were spray painted on the asphalt and riders were given map packs with rides usually ranging from about 30 miles to 75 miles.  Some years there was a hundred mile route--a century-- on Friday.
While aways in the Felicianas, the location of Jam headquarters moved around through the years as facilities and needs of the BRBC changed.  The Jam heyday might be considered to be those held in the 1980's when Woodland Campground would be the temporary home to 250-300 riders, friends and families.  Every year a few from outside the immediate area would visit, hearing about the rides through mentions in bicycling oriented publications.
At night, after a communal meal of jambalaya and all the trimmings often served in an open air pavilion, participants would drift over to one of several campfires and spend the rest of the evening swapping stories and bicycle lore.
Except on Saturday night.  That was Cajun dancing night with a live Cajun band.  A loud Cajun band.  Early in the evening there was plenty of room on the concrete slab as riders, some still in their jerseys and tights were reluctant to join the more experienced two-steppers.  But if that November night was cold and the wind was whistling through that open air pavilion, after a little "liquid encouragement" from M&J, a convenience store on the highway, one could witness some mighty fancy foot work by many who were experiencing that part of Cajun culture for the first time.
Beginning with the 1990's attendance began to dwindle.  By 2000 the BRBC was just breaking even.  Jam 2004, with a paltry attendance of about five dozen riders proved to be the last.  In August of 2005 Hurricane Katrina struck while the BRBC was mulling the future of Jam.  The decision was made to pull the plug on the venerable gathering and the BRBC has not scheduled one since.
(A couple of years after Katrina a series of rides over the Thanksgiving holiday were held, headquartered in Jackson, LA. but the event was low key and not widely publicized.)
Why are there no more Jambalaya Tours?  Maybe there ceased to be a need for Jam.  Single men and women in their 20's and 30's in 1980 have better things to do when they are older and in their 50's and 60's.  It can be harder and harder to put in the training time to ride 40-75 miles a pop with so many other responsibilities, not to to mention abandoning families and non-riding friends for the three-day holiday.
Events for touring bicyclists (non-racers) have changed.  Multi-day linear rides across a state or region that offer nightly camping or gymnasium floor accommodations are more popular now than then. The Bicycle Ride Across Tennessee (BRAT) is an example of this.
And the riding culture as changed a bit.  Beginners who want to ride but are wary of a tightly packed pace line don't get much love from groups of veteran riders who see every outing as a race to the death.  Tourist are often left on the road alone now.
Even at its peak Jam was an acquired taste for some.  The Woodland years are probably best remembered by some as the "Cold Shower Years" as the hot water tank for the campground's single shower could only heat water fast enough to provide each day's early finishers a hot shower.
Not everybody took to camping or looked forward to two or three nights of sleeping on the ground.  Civilized but spartan indoor accommodations at the Feliciana Retreat Center (in Jam's later years its headquarters) were available but were off-site and removed from the action at the campground requiring a drive to connect.
Will their be another Jam?  I dunno.  The rides are still there.  The roads and environment in East Feliciana Parish have changed little.  In West Feliciana Parish there has been a large amount of development but the area is still a popular venue for both weekend rides and centuries just as it has been for more than 40 years.
So if you were one of the fortunate ones who attended one or more of these unique events, consider yourself lucky.  You have the many memories of the good times and adventures Jam would serve up every year.  From the hokey encouragement spray painted on the pavement to the looooong gravel entrance roads, Jambalaya Tours was a memorable experience for 36 Thanksgiving holidays.
(This month, in response to a proposal by the West Feliciana Police Jury to require rides larger than three people to get parish permits, members of the BRBC and parish officials have agreed to work out a permit that would apply to larger groups of cyclists at special events such as centuries.  Word on the street is that the need to corral cyclists is a response to bad behavior by cyclists who park at volunteer fire stations without permission and use the property as a bathroom.)