(Note: As of October 3 crushed stone has been spread on most of the trail but the grind of the stone is too large.  Cyclists will find it difficult to ride the new stone surface as the loose rock makes it easy to lose traction and fall.)

For years the forested lowlands, wetlands and swamps in the southwest corner of Hancock County, Mississippi have attracted birdwatchers flocking to catch a glimpse of acrobatic swallow-tailed kites or tiny, and tuneful electric yellow prothonotary warblers.
The Logtown Cemetery, on Logtown Rd, south of I-10 is birding ground zero in the county and attracts the birding faithful from around the U.S.  It is one of 40 birding sites listed on the Mississippi Coastal Birding Trail, sponsored by the National Audubon Society.  The trail was established by widely respected birder, the late Judith Toups and includes sites in six of the southernmost counties in Mississippi. (www.mscoastbirdingtrail.audubon.org.)
A year ago the cemetery grounds became the southern terminus of the Possum Walk Trail: an improved and graded dirt trail extending north about 3.2 miles to the Infinity Science Center adjacent to the Mississippi Visitor Center off I-10 at exit #2.  The trail passes through a mix of habitats: southern mixed hardwood forest, bottomland hardwood forest and cypress swamp.  A boardwalk and bridge cross over the swamp and the Bogue Homa.  A handicap accessible kayak launch is at the bridge.
As this is being written, the dirt trail is being resurfaced with crushed stone to prepare it for electric trams that will carry tourists from the Infinity Science Center on nature treks..  Work should finish and the trail reopen by early October 2015.  In addition to walkers, hikers, runners and the trail is open to pet owners (as long as the pets are on leashes shorter than eight feet and owners deposit their pet's waste in garbage containers) and equestrians who are required to clean up waste left by their horses.  Also electric carts are permitted.  Bicyclists, even through riding bicycles with fat tires will probably find the crushed stone too lose making it possible for a cyclist to loose traction and fall while riding the trail.
The terrain is flat; the trail mostly follows an old dummyline railroad grade.  Short railroads of a few miles or so were often built by lumber companies to haul harvested trees to the mills to be sawed into lumber.  Some say they were called "dummylines" because logging employees often rode them along with the cut trees.
(The parking lot forthe Possum Walk Trail end at Infinity Science Center, generally opens at 7 a.m. and closes at 5 p.m.  The lot, the Science Center and that end of the trail is closed on Sunday.  The hours of the Infinity Science Center are from 9am to 4 pm., Monday-Saturday; closed on Sunday.  Admission.)
However, the Logtown Cemetery end of the trail, is open sunrise to sunset, seven days a week.  Park by pulling off the dirt road at the cemetery and walk .3 miles west on Logtown Rd.to the beginning of the boardwalk.  This short stretch of Logtown Rd. is lovely and mostly in the shade of huge ancient live oaks.  There is room at the boardwalk for a couple of cars to pull off the road but parking here is not encouraged.  Posts a half mile apart measure distances on the trail.  However it is difficult to determine exactly how long the trail is.  The mile marker at the cemetery kiosk measures 3.2 miles from the Infinity Center to the cemetery.  However, the brochure,  "Birds of Logtown" available at the visitor center and the best map of the trail states the Possum Trail is 7.2 miles (probably a round trip distance,)  Also the map in the brochure suggests a loop can be made by taking back roads to the Infinity Science Center.  This is not worth the effort.  Return to the Infinity Center by retracing your steps.
A kiosk near Logtown Rd. at the cemetery has more information on Logtown and a map.  Hunting is permitted on some lands surrounding the trail (observe all posted signs, local regulations and seasons) but firearms are not permitted on the trail.
The closest vehicle parking to the handicap accessible kayak launch on the Bogue Homa is Logtown Rd., about an eighth of a mile down the boardwalk from the ramp.  The ramp may or may not be operational.
To launch closer to the water, continue west from the cemetery until Logtown Rd. dead ends at the Pearl River.  There is a small concrete boat launch there, nothing else.  It is hard to find a place so quiet.  The mouth of the Bogue Homa is about 100 yards upstream (to the right or northwest).
When the trail opened a year ago, it quickly became popular with trail runners who used it to train for adventure races.  The second annual Roadkill Run scheduled for Saturday, October 10, 2015 has been cancelled.

The cemetery is about the only remaining physical presence of Logtown, a once thriving, sawmill town that a hundred years ago was home to 2,000-3,000 people.  Nothing of the houses, churches, school, store, boarding houses for mill workers, bank or post office remains.  Gone are the large marina and docks on the Pearl River where hundreds of workers loaded lumber for shipment around the world.  Gone the labyrinth of railroad tracks and smoky steam engines that hauled car after car of cut trees to the mill and then the lumber from them across the U.S.  Hardly a trace is left of the sawmill itself, for years employing over 1,000 workers, 24-7 sawing the huge logs down to lumber.
The Possum Walk Trail, gets its name from a small African-American community, once across Bayou Homa from Logtown.  It is gone too.  Possum is said to have been settled by escaped slaves who found the remote alligator and snake infested wetlands ideal for hiding from their owners.  Later they were joined by former slaves freed after the Civil War ended in 1865.  Later generations took jobs in the thriving lumber industry centered in Logtown across the bayou and home to one of the largest lumber mills in the world. 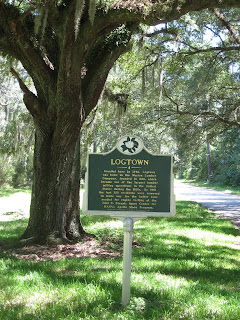 By 1930 the stands of massive hardwoods and tall pines were exhausted.  Lumber businesses, the economic lifeblood of the area, folded.  The populations of towns near the Pearl River quickly shrank as people left the county in droves to look for work.   Some of those remaining supported themselves by trapping.  Muskrat was plentiful in the surrounding wetland and there was a big demand for muskrat pelts in New York City where they were made into fashionable coats.  But nutria, a non-indigenous species from South America imported to augment the muskrat harvest, instead decimated the smaller rodent, all but eliminating the fur trade in Hancock Co.  A declining interest by the public in wearing fur of any kind soon made pelts that could be harvested nearly worthless.
Largely depopulated by the mid 20th century (Logtown had about 250 people in 1961) the area around Logtown attracted the attention of the National Aeronautics and Space Administration (NASA).  The agency was looking for a site to test rockets to power a spacecraft to land a man on the moon and return.  In the process of establishing the Stennis Rocket Test site in the 1960s, a 125,000 acre acoustical buffer zone was created.  Those still living in Logtown and other former logging towns in the buffer zone were relocated.  Some sold their land to NASA outright.  Others retained ownership of the land (any buildings were removed) but agreed to selling NASA a surface easement that prohibited the landowners from building or even camping on land they owned.  All other land rights were retained by the landowners.

For more information about the Possum Walk Trail call the Infinity Science Center Visitor Center at 228-533-9025, or go to : www.visitinfinity.com.  To view the "Birds of Logtown" brochure, visit www.unarch.com/practice/possum-walk-scenic-byways/  There is a gift shop in the visitor center.  You can buy the same "ice cream" the astronauts eat on space flights there.  A cafe in the Infinity Science Center Visitor Center is open for lunch Monday-Saturday, 11 am-3 p.m.  Friday is pizza day.  The cafe and the visitor center itself, are closed Sunday.