Lafitte Corridor: Nine years and no trail yet

PAVING OF A PORTION OF THE 3.1 PROPOSED PATH COULD BEGIN BY END OF YEAR

In May of 2004, just as a lark,  Bart Everson and two friends hiked a 3.1 mile section of derelict abandoned railroad right of way linking Basin St. with Canal Blvd.  He saw through the garbage, visualizing instead a green space with a paved trail used by walkers and bicycle commuters to connect the French Quarter with lower Lakeview.
Each year the hike has been reenacted, sometimes attracting 150 participants in shorts, boots some pushing bicycles or baby strollers.  They make the urban trek past abandoned and rusting businesses, the city's former brake tag inspection station, through the shards of broken glass and waist high weeds to promote the building of a park and trail in the right of way.
Looks like they are going to have their way.  This year's hike may have been the last year of walking the greenway as a weedy and trashy urban eyesore.
Fliers handed out to this year's group of about 50 hikers on the 9th annual hike sponsored by the Friends of the Lafitte Corridor (FOLC), proclaimed construction on the path is projected to start by fall 2013.
Funding, most of it from a Disaster Recovery Community Development Block Grant will provide for just the basics; the trail, landscaping and some signage.  Many more facilities have been proposed for the land that will become the city's first park in two decades, but they will have to wait until funding becomes available.
At several stops along the trek of the future greenway (the park is the greenway, the Lafitte Corridor includes blocks of housing and commercial enterprises flanking the greenway) volunteer guides gave hikers insight into the greenway's future.  The lunch stop was at the western end of Bayou St. John where the proposed trail crosses the existing Jefferson Davis Parkway path.  Under a big tent hungry walkers were treated to po boy sandwiches from the nearby Parkway Bakery and Tavern.
There was music along the route: a brass band at the lunch stop and a jazz trio at Bud's Broiler on City Park Ave. where the hike ended.
Rain postponed the hike from the previous Saturday which may explain the much lower turnout than previous years.   However weather for the May 18 event was warm with partly cloudy skies.


TRAIL WILL NOT CONNECT BASIN ST. WITH CANAL BLVD.


The first phase of the trail starts at Basin St. and dead ends at N. Alexander; a distance of about 2.4 miles.  The remaining .7 mi. to Canal Blvd. is an active railroad with a train servicing a brick yard several days a week.
An agreement allowing the trail to be completed to Canal Blvd, could not be reached between Norfolk-Southern, the railroad with the right of way between N. Alexander and Canal Blvd, and the city,  FOLC members said.
(This means trail users will forced to detour using surrounding streets to connect with Canal Blvd. and City Park.)
The project appears to be grinding along at a snail's pace for many reasons.  After the devastation of Hurricane Katrina in 2005 the city was focused on reconstruction, not park creation.  Later, after bids had been accepted and a planning firm selected, the whole process had to begin again after an election brought in a new administration.  But those familiar with public capital improvement projects say things are moving about as fast as can be expected.
While the Lafitte Corridor trail itself has yet to see any signs of the construction outside of a little grass cutting, businesses within the corridor are busy preparing for the greenway's eventual opening.
The trail passes by Mid-City Market, a small shopping center under construction in the footprint of a shopping center and car dealership on N. Carrollton Ave. destroyed by Hurricane Katrina in 2005.  Mid-City Market developers, at the urging of the city, have included access to the trail providing trail users easy access to the Winn-Dixie, Office Depot and several food outlets and other businesses in the development.
Where the tracks and City Park Ave. intersect, Shannon McGuire, owner of one of seven Bud's Broiler franchises, is getting her business ready for the trail's opening.  McGuire, who made the hike with the group, said she is installing bike racks and an area with piping to spray a cooling mist on overheated summer trail users.
The building now housing Bud's Broiler has a history.  It was built in the 1920's as a ticket station for passengers boarding trains--pulled by steam engines in the early days-- of the Southern Railway, McGuire said. (The tracks were laid 1905-1908.)   Later, when the railroad moved its passenger service to the "new" Union Station on Loyola Ave, the small two-story frame building on City Park Ave. became the city's first Bud's Broiler in 1952.  (The Southern Railway became part of Norfolk-Southern in 1982.)
The cozy burger joint has since become a treasured tradition in New Orleans, serving charcoal broiled hamburgers, hot dogs, onion rings, French fries, hot pies and shakes to hungry patrons 24/7.  McGuire has modernized the menu expanding the sandwich offerings.  Seating has been expanded with tables outside on the sidewalk and a patio in the back. 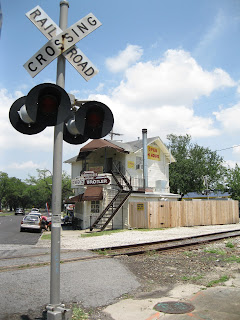