Using the bicycle racks on a bus in New Orleans

This post is about using the bicycle racks on the buses in New Orleans and Jefferson Parish.  It is an expansion of what appeared with the bicycle parking at the New Orleans Jazz and Heritage Festival PRESENTED by Shell. 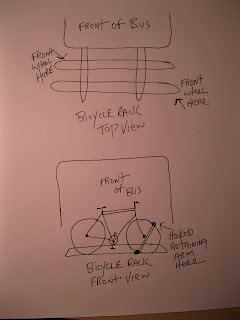 There is no additional fare to use the bicycle racks on the front of New Orleans Regional Transit Authority buses ($1.25) or the JeT buses ($1.50) in Jefferson Parish.  And permits are no longer required on either system to use the racks.  Streetcars in Orleans Parish do not carry bicycles.
At the RTA site, www.NORTA.com, info can be found on schedules and fares.  Also there is a verbal description on how to use the bicycle racks on their buses but no pictures or illustrations.  (This may change soon.)   I have not redone the RTA text but have included my own take on how to look like a transit pro the very first time you put your bicycle on a bus bike rack.  To make it easier for a bike rack newbie, here are a couple of "high quality" illustrations on how the bike is mounted on the rack.
Let's go over what happens.  Here comes the bus.  You are standing at the stop on the curb.  The bus stops.  Roll the bike to the front of the bus.  If the rack is not down, that is, it is not open and a bike is not in it already, grasp the latch at the top of the rack, unlatch it and open the rack.  Stand back a little bit and lean toward the bus to reach the latch on the rack.  If you don't you may find the rack will hit you and not fully open until you and your bike move back.
The rack is now down in the open position.  Try to make eye contact with the driver to get some feedback as to which tray the operator wants the bike placed in.  Some bus operators like the bike in the tray farthest from the bus front, some like it in the tray closest to the bus. Lift the bike up and place it in the tray. Using the tray farthest from the bus means the front wheel must be facing to the right-facing the bus your right.  Using the tray closest to the bus means the front wheel must face to the left-facing the bus your left. If you are using the tray farthest from the bus you will be holding the oily part of the bike, the chain and chain ring, near you so be careful you do not "tattoo" yourself with black grease putting your bicycle on the rack.  Got HandiWipes?
Take the metal arm with the hook at the end from near the bottom of the tray pull the spring-loaded hook out and hook it over the front tire at about 2 o'clock.  Make sure it makes good contact with the tire.  Do not place the hook close to the fork or over fenders.  Bring your helmet with you onto the bus and anything else you think might blow or jiggle off the front of a bus cruising at up to 35-miles per hour on a bumpy street.
This ritual is a little easier if there are two people: one holds the bikes as the other loads them.  Solo cyclists will have to hold the bike up while lowering the rack and after the trip is over, hold the bike up while restoring it to its upright position.  As you approach your stop ask the driver for a little time to get your bike off the rack.

Tks you so much for this post!!
I will be flying to New Orleans this september with my bike. As I was reading the "verbal description" on the public transport website, I was a bit worried because not clear!
However, when I read you post it all became clear. It says it all! Tks again
Sonia

Thank you for your kind words. If this is your first visit to the Crescent City, enjoy your time here. Here are a few updates about bicycling in the city not yet in the blog. The Lafitte Corridor bike path, from Basin St. to Mid-City, about 2.6 miles, is now open though not officially. The Canal St. bicycle/passenger ferry to Algiers Point now runs later into the evening some nights, check the NORTA site. BikeEasy, the local bicycle advocacy group, is a good source for info but the claim of over 100 miles of "bicycle paths" is exaggerated. About 40% of that mileage is gained by painting "sharrows" on busy streets. Just use common sense as you tool around the city.
Jack