Bicycling to work in New Orleans has its day-sort of

Fair skies and moderate springtime temperatures greeted cyclists today (04-11-02) for Bike to Work Day in New Orleans.  Once before, in the mid 1990's, there was a city-wide effort to get people to abandon their cars for just one day and bicycle to work.  The two events, separated by nearly 20 years were very similar.
Both times the weather was fabulous, dry and sunny. And both times about 100 riders, riding to the CBD from outlying meet-ups, touched base at a central gathering place with coffee and refreshments. This year it was Lafayette Square in the CBD.  And both times most of the riders were veteran bike commuters.
This year's event was organized by Bikeeasy, a New Orleans bicycle advocacy group with help from Entergy, the utility company servicing New Orleans.  Announcements were placed in the city's alternative newspaper, the Gambit and at various social media sites on the Internet.
Determining how many participated in this year's Bike to Work Day is like trying to nail jello to a tree.  It's hard to do.  While groups did gather at five me-ups in Mid-City, Algiers, Gentilly, along St. Charles and across the river in Algiers, many people who ride to work kept their own schedules, starting their trek downtown before the staged 7 a.m. departure or afterward.
They may have participated unwittingly streaming down the Jefferson Davis bike path or along the many streets heading downtown to their offices, and workplaces as they do every workday.  It's just what they do.
The gathering at Lafayette Square was low key.  There were no speeches (at least not after the Mid-City group got there,) and, oddly enough for New Orleans, no music.     There was more media attention during the ride years ago: one television broadcast progress updates as a reporter rode with a group.  And there were donuts.  This year only a healthy fruit smoothie. 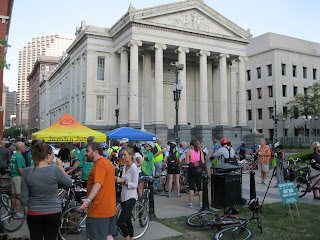 New Orleans Mayor Mitch Landrieu was in his riding togs on a bike, having made the trip on two wheels.  He is a runner too.  Also living the cycling life, at least for the moment, was current New Orleans City Council member and candidate for an at-large seat, Stacy Head, radiant and beaming after her bicycle trek from Uptown.
So what does it say that an effort to increase bicycle commuting with gasoline nudging the $4 a gallon mark got the same results as an effort nearly 20 years ago when gas cost a fraction of what it does today?
It might take more than a fruit smoothie or a donut for people to trade their car-trip for a bicycle-trip to their job.

Thanks for providing the long perspective — very important.