BOOK REPORT: "Waiting on a Train" by James McCommons 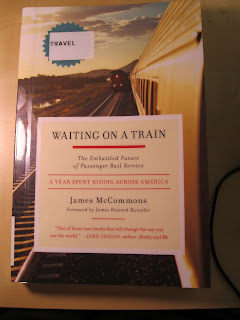 Driving to a hiking, paddling or bicycling destination can be such a hassle.  Traffic, high gas prices, the environmental toll of the internal combustion engine and land taken to build highways to drive it on all leave us wanting a better way to get the heck out of Dodge.
Are passenger trains the answer?  Well, maybe says James McCommons in his book "Waiting on a Train-The Embattled Future of Passenger Rail Service," (Chelsea Green Publishing Company, 2009).  But there are a lot of maybes.
The book is about Amtrak, of course, the corporation established by Congress in 1970 to take over intercity passenger service in the U.S. from the railroads who, having to compete with federally financed interstate highways and an expanding airline industry, were loosing buckets of money running passenger trains.
McCommons spent a year (2008) riding 15 long-distance trains- from the "high-speed" Acela Express in the Northeast Corridor and the well-appointed Amtrak Cascade trains on the west coast to the leisurely Cardinal crossing West Virginia connecting New York with Chicago with creaking rolling stock leftover from the 1970's.
(Just after the book was published Amtrak hauled a record 28.7 million passengers Oct. 2009-Sept. 2010.)
But the book is not a travelogue.   Mountain vistas and scenic desert sunsets are noted but mostly McCommons uses on-board train encounters with fellow passengers and Amtrak staff to launch into discussions about the economics and practicality of long distance passenger service in the U.S. as well as a detailed history of Amtrak and its rolling stock.
And he talks to everybody-from heads of each of the freight railroads on which Amtrak trains run to pols and passenger service advocates there at the birth of Amtrak and those who guide it now.
McCommons takes a tough love approach to current Amtrak service highlighting the good and the bad.  He points out dismal on-time stats and grumbles about declining food service quality.  But he positively gushes praise on the Spanish-built Talgo trains running the Seattle-California route with their business class seats, movies and an on-train bistro offering gourmet coffee, newspapers and freshly cooked oatmeal.  Sleeping accommodations are critiqued.  He says nice things sometimes and the overall tone of the book is cautiously optimistic.
Valiant efforts by some railroads to keep passenger traffic in the face of increasing competition from super highways and airlines in the 1950's and 1960's are well documented.  And while railroads took a hit financially as more business went to truckers using the newly completed Interstate system, McCommons argues that now freight railroads are more profitable than ever.  Railroads are jammed with freight traffic now and will have to be substantially expanded not only to meet the nation's future freight hauling needs but for any increased passenger service too, he claims.
The book is an easy read despite the fact it covers in depth topics such as the adversarial relationship between Amtrak and the freight railroads on which Amtrak trains run (a topic he returns to again and again throughout the book) as well as why Amtrak has not yet been weened from federal subsidies.
McCommons rode all three Amtrak trains that service New Orleans: the Crescent. a daily train to New York, the City of New Orleans, a daily train to Chicago and the Sunset Limited a three-day-a-week train to Los Angeles.  While in the Crescent City he visited with Karen Parsons, a planner with the New Orleans Regional Planning Commission.  Parsons is best known to New Orleans area bicyclists as a soft-spoken but firm advocate of including bicycling in the region's transportation mix.
However it was her passion for rail, especially high-speed rail connections between New Orleans and Mobile that McCommons discusses.  She said residents of New Orleans want rail commuter service to Baton Rouge, the state capital, as an alternative to the interstate highway, I-10.
Perhaps her biggest victory is keeping the Sunset Limited service.  (The line discontinued service to Jacksonville and the Mississippi Gulf Coast after hurricane Katrina in 2005.)
"Right now, the best we've been able to do is stop Amtrak from decommissioning that train permanently," she said.
For anyone who would like to see long-distance passenger service continue in the U.S. this book will bring you up to speed on what the future could hold for railroads and the chance of you using one to go somewhere.  The book is available at the Jefferson Parish Public Library (Louisiana).